Zdar nad Sazavou is situated at the frontier of Bohemia and Moravia in a picturesque region of Bohemian-Moravian Highland in the centre of the protected landscape area of Zdarske vrchy.

Its history is closely associated with the development of the Cistercian monastery in Zdar and dates back to the second half of the 13th century. Cardinal Frantisek of Ditrichstejn promoted the small village of Zdar to a town in 1607. The former monastery developed the present form during large reconstructions in the time of Abbot Vaclav Vejmluva in the first half of the 18th century. The reconstructions were designed by architect Jan Blazej Santini-Aichel.

The pilgrimage church of St. John of Nepomuk at Zelena hora is the highest achievement of his work and a unique architectural monument, which was included on the World Heritage of UNESCO in December 1994. Larger architectural changes arrived in Zdar at the turn of the century. There was a steep rise in population, associated with construction of the ZDAS machinery works in the 1950s. The design of the town and of the whole landscape has changed a lot. A modern, administration and commercial centre and new neighbourhoods were built.

Church of St. John of Nepomuk at Zelena hora (Green Hill) was built in the years 1719 to 1722 in Zdar nad Sazavou.

The Information Centre has been run since 1993 by a travel agency called SANTINI TOUR. 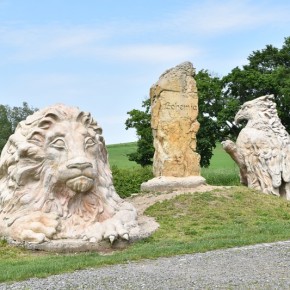