Symbol of a legendary saint and masterpiece of an architect

At the beginning of the 18th century an architectural style unparalleled in the rest of Europe developed in Bohemia. Known as Baroque Gothic because it involved the transposition of Gothic elements into Baroque form it was the style in which the Church of St. John of Nepomuk at Zelena hora (Green Hill) was built in the years 1719 to 1722 in Zdar nad Sazavou.

Pilgrimage Church at Zelena hora is a unique work of art and indisputably the most original and individual building designed by the brilliant Bohemian architect of Italian ancestry Jan Blazej Santini-Aichl in the Baroque Gothic style. It is a building that escaped the conventional architectural rules and nostrums of the time, and it impresses even the modern eye as quite exceptional, with its complex interconnecting spatial forms, the dynamism of tis volumes, and the upward lift that defies the weight of the masonry.

The foundation of the church was linked to the preparations for the beatification and canonisation of John of Nepomuk after the opening of his tomb in St. Vitus´s Cathedral in Prague and the finding of his allegedly miraculously intact tongue. Construction started in 1719 on the orders of the Abbot of the Cistercian monastery in Zdar, Vaclav Vejmluva, and the church was consecrated a mere two years later.

John of Nepomuk (in Czech Jan Nepomucky, originally Jan of Pomuk) lived in the reign of the King of Bohemia Wenceslas IV, son of Charles IV. Through education and industry Jan worked his way up to become a vicar general. Long-running disputes between the King and John of Jenstejn were to have a brutal impact on John´s destiny. When Jenstejn obstructed Wenceslas´s plans for the creation of a new bishopric in West Bohemia, the king decided the time had come for cruel punishment of the offenders. Archbishop fled from the King´s wrath, but John of Pomuk and several others ended on the rack. John did not survive the torture, and was already dead when the executioner´s assistants threw his body into the Vltava River from Charles Bridge. What then is the origin of the legend of Jan the martyr? A year after his death there was a terrible drought, which people regarded as God´s punishment. What is more, in an attempt to paint the king even blacker certain clerical circles started to spread reports of John´s courage, saying that as confessor to the Queen he had refused to reveal her secrets, and that was why he had been murdered. Belief in John´s supernatural powers culminated with the discovery of the saint´s supposed tongue when three centuries later his tomb was opened and a priece of reddened tissue fell out of his skull. The mystery was cleared up in 1973 when scientists showed that the reddish tissue was not a tongue, but part of the brain with congealed blood.

The layout of the building has mystical aspects mentioned in the even at the time when it was complete. The basic principle is the composition of the five-pointed star (five-pointed ground plan, five enterances, five altar niches, twenty-five chapels around a central space, five stars and five angels on the high altar), the symbol not only of the five wounds of Christ, but also of the five letters in the Latin word „tacui“ (I kept silent) and above all the five stars in the halo of the martyr St. John of Nepomuk, which the legend tells us were seen above his drowned body.

In the very centre of the building, at the top of the cupola, is a tongue, symbol of John the martyr of the secrets of the confessional. It is also to be found in the form of the pointed windows. The composition of these windows by the lantern chapel above the entrance resebles a sheathed sword. According tot the legend Jan´s determination not to reveal the confessional secret meant that his tongue remained hidden in his mouth like a sword in a sheath.

The high altar on the eastern side is set into high arcades that reach right up to the second-floor gallery. The sculptures of five angels on the high altar and the four evangelists are the work of the Chrudim sculptor Jan Pavel Cechpauer. Three of the angels carry a sphere (the triumphal arch) decorated with five stars (symbolizing the five known continents where Christianity was spread). On the sphere stands the figure of St. John of Nepomuk, the work of Rehor Theny. Despite the massive size of the walls, the whole shrine gives an impression of lightness. There is little ornament and no grandiose Baroque frescos; the idea is expressed just by the way the light works in space.

The church is surrounded by cloisters in the pattern of a ten-pointed star, which provide shelter for the pilgrims from bad weather. The relationship between the ten-pointed star (refers to the ten-sided Marian well of the monastery in Zdar) and the five-pointed star (symbol of the Virgin Mary) represents the Cistercian well in Zdar in the surface of which the Marian star is reflected through St. John of Nepomuk who revered the Virgin Mary in the same way as did the Abbot Vejmluva who had the church built.

In recognition of its unique value, the whole complex of Pilgrimage Church of St. John of Nepomuk at Zelena hora was placed on the prestigious UNESCO List of World Cultural Heritage in 1994. 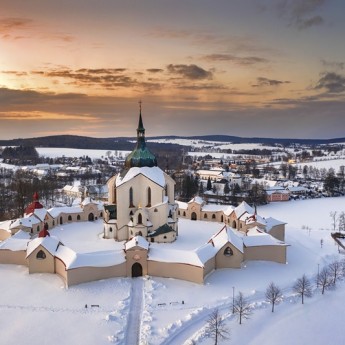 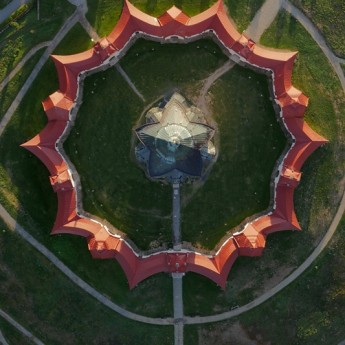 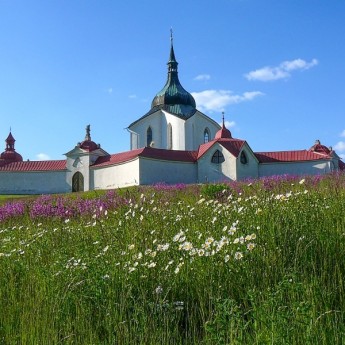 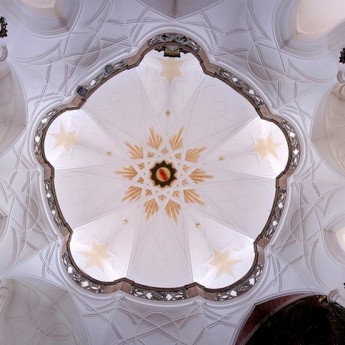 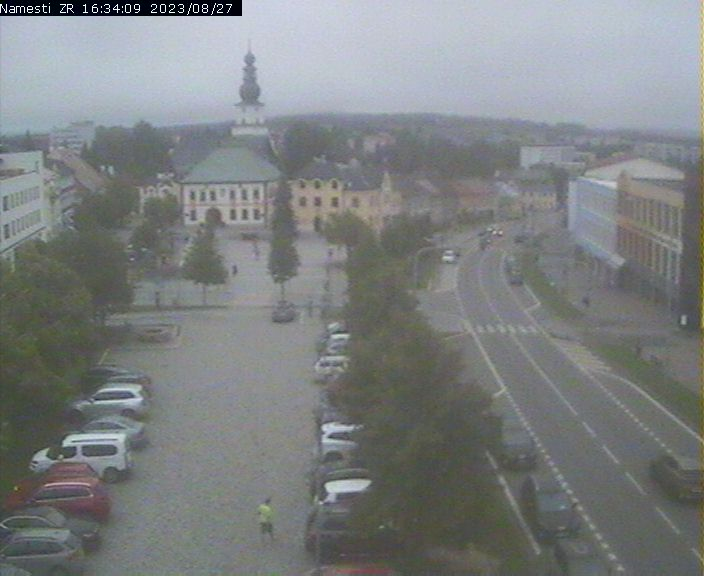 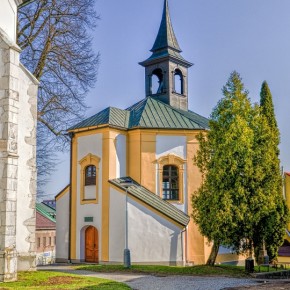